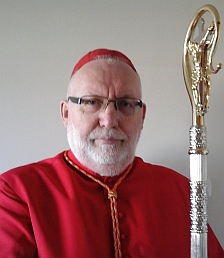 After graduating from the university, Ritsbek worked as the Secretary of the Board of the United Methodist Church in Estonia (1977-1982) and as a pastor of Tallinn United Methodist Church (1979-1989). On March 9, 1979 Bishop Dr. Ole E. Borgen ordained Heigo Ritsbek as a deacon. In February 1989 Heigo Ritsbek and his family emigrated to the United States of America. Pastor Ritsbek continued there theological studies at Asbury Theological Seminary, graduated it with Master of Divinity (M.Div.) degree in 1993. Then he entered into Boston University School of Theology, which he graduated in 1996 with Doctor of Ministry in Theological Studies degree (D.Min.). His doctoral thesis was entitled “The Mission of Methodism in Estonia”. After graduating Boston University, The Ritsbek Family returned back to Estonia.

In 1996 Heigo Ritsbek joined The Charismatic Episcopal Church, he was consecrated as a priest on June 23rd 1996 in Jacksonville (Florida, U.S.A) by the Archbishop, The Most Reverend Dr. Dale F. Howard. After that Fr Ritsbek returned with his family back to Estonia and began to establish the Charismatic Episcopal Church of Estonia. Heigo Ritsbek served as the Vicar General of the Church (1996-2011) and the Rector of St Stephen the Martyr CEC Church (1996-2011).

On August 25, 2012 the Rev Fr Heigo Ritsbek was consecrated a bishop in Kasese, Uganda, Africa by the Most Rev. Dr. Kiiza S. Thomas, D.D., The Archbishop for Africa of the HCCI.

Since September 2020 Dr. Heigo Ritsbek serves as The President of Holy Trinity Anglocatholic School of Ministry.

Dr Heigo Ritsbek has served as a teacher of history, civics, and philosophy at Tabasalu Grammar School (2011-2018). He has worked with intervals as an Associate Professor at Baltic Methodist Theological Seminary (1996-2012). From 2000 to 2010 he served as a teacher of religion, philosophy and history at Rocca al Mare School, and as a professor at Tartu Theological Academy, and at Tallinn Maritime Academy (2004-2005) and at Gustav Adolf Grammar School in Tallinn (2011-2014).